To begin this exercise split the group up into smaller groups of three.  You may want to do each group of three one at a time with the other members of the group as watchers.  You can do all the groups at once, but make sure that they are not close together.  This exercise is meant to be somewhat confusing and many people talking at once could make it even more so.  Put the three participants in a line like so: 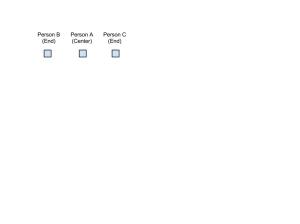 Make sure that each person in the trio is able to be in the center.

In reverence, talk about what it was like listening to and participating in both conversations.  Did you miss important information?  Do you know what both people said?  Was it too complicated to keep up?  How was it different than a simple conversation with one person?

Great for the themes of: Simplicity, wisdom, and myth.  This could work with any theme if you provide it as the topic of conversation.