To begin this exercise break the group up into pairs.  Give the pairs a topic of conversation that you have decided on.  One person in the pair begins to talk about the topic that you have given.  They are the initiator.  The other person in the pair, the follower, mirrors the words that the first partner exactly out loud.  Their goal is to speak the words that the initiator is saying exactly.  After a short time the sidecoach will say “Change” and the follower will now start to be the initator, picking up where the two just left off.  The first speaker will now become the follower and begin to mirror the words of the new initator.  The goal is to have no break in the flow of the conversation.  For example:

1st Speaker (initiator): Meditation is something that you can do anytime and anywhere…

2nd Speaker (follower): mirroring speech simultaneously Meditation is something that you can do anytime and anywhere…

After a period of time

Sidecoach: Change!  Try not to stop the flow.

Change the initiator and follower several more times throughout the conversation.

In reverence, talk about what it was like sharing the conversation.  Was it hard to keep the flow?  Did it get easier as you went along?  Did you begin to know what the other person was going to say?  Did you share some wisdom or learn something new?

Great for the themes of: The Sources, Wisdom.  This could work with any theme if you provide it as the topic of conversation.

This is a standard acting exercise.  Begin by getting participants in a circle or surrounding the space.  One person will be in the middle and go up to people in the circle to say “Kitty wants a Corner.” To which the person in the circle will say “Ask my neighbor.”  The Kitty then moves to the next person and says the same phrase.  The people in the circle’s goal is to switch places with someone in the circle while the Kitty is asking for a corner.  The Kitty’s goal is to take the place of someone that is switching.  The person that is left in the middle if the Kitty gets their spot is the new Kitty.

In reverence, talk about how this relates to hospitality.  Have you ever sent someone to a “neighbor” instead of helping them yourself?  How did it feel to be the one asking for help?

Great for the themes of: Hospitality, Common Ground, Salvation, Community, Covenant, and Compassion.

Also a great Warm up.

The Space Between the Stars

To begin this exercise split the group in half.  One half will do the exercise and the other half will be the watchers alternately.  With the first group, explain that they will start by individually putting their hands about 2 inches apart and move them together around the space.  Their hands can go anywhere, as long as they stay about 2 inches apart.  Tell the watchers to focus on the space between the hands.  Once they have done this for a few minutes switch groups and let the watchers do the exercise.

Next switch back to the first group and have pairs of people put their hands about 2 inches apart and do the exercise together.  Again remind the watchers to see the space between the hands.  Let the second group do the same after a few minutes.

You can build up however you would like, but the goal should be that at the end of the exercise, the entire group should be doing the movement together.  Make sure that they keep their hands about 2 inches apart.  This will become more complicated as more people are working together.

Great for the themes of: Common Ground, Divinity, Mysticism, Grace, Community, and Covenant.

One Part in a Whole

In reverence, talk about what it was like working as a whole.  How was it like the covenant in class?  Did everyone think it was the same activity?

For this exercise you will need a piece of paper for each group.  The paper should be divided into three columns with a number 1, 2 or 3 and a word or subject at the top of each column.  Begin by dividing participants in to groups of three.  Then you can explain how the game will work.  The participants will sit in a circle and will always pass the paper to their right.  You can either say “pass” or “switch.”  Practice passing the paper so participants get in the habit of just passing to the right.  Now explain that after you tell them to pass, you will say a number of one of the columns.  When they hear the number they should start writing about the word or topic immediately.  Between the three people, they will all write about the topics.  For example: 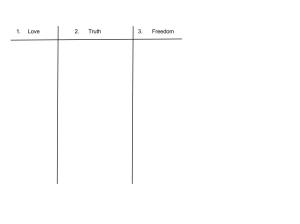 You should continue around at least twice and randomly say the numbers.  At the end you should have paper filled with three different people’s writing on the three subjects.  Have the groups read together what they wrote.

In reverence, talk about what it was like writing in a community.  Did they just write their own or did they try to read and add to what was there?  Was one person’s idea of the topic the same or different?

Great for the themes of: Community, scripture, grace, the sources, learning and growth, common ground.  This would be a good exercise for any of the themes.  Just change the topics to fit that theme.